Read below to get all the deets on one of our most recent surgical cases including how mild oral sedation can help the fearful patient & how guided surgery is becoming the standard of care—and for good reason. 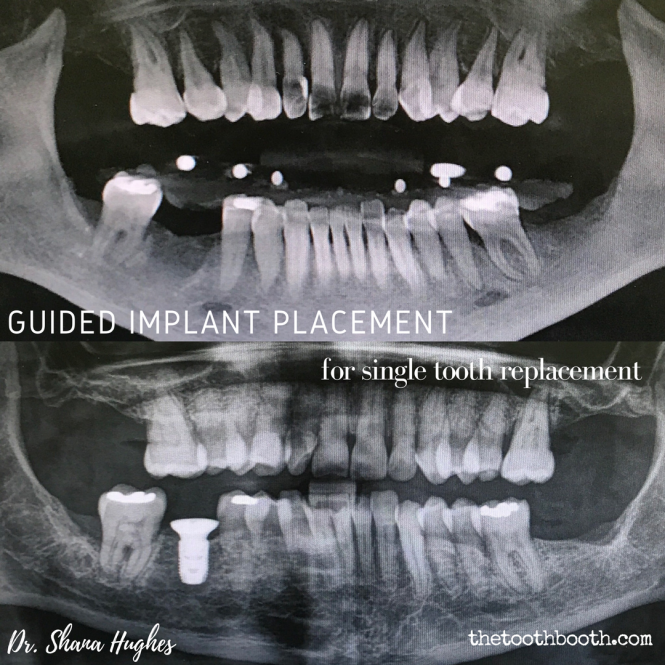 This is the planning (top) and postoperative (bottom) image of a recent case we finished in our office that replaced a single missing tooth with an implant through our guided surgery technique.  That was a lot of information in a single sentence for a non-dentite (dentite is an endearing term for dental nerds), so let me break it down for you.

Let’s start with a little background info on the patient.  She started coming to us a couple years ago.  She was scared to death.  The dental office definitely did not make the top of any of her lists except maybe her $*!+ list (sorry, had to as that’s what flowed from my mind first and I feel like blog posts should have the goal of always keeping it real—besides, I didn’t actually say it—I definitely did think it though as that’s a common list my dad often mentions).  I digress.  She was very anxious about dental treatment of any sort but a surgical procedure is definitely something I could not have spoken to her about at the beginning of our relationship.  At her first appointment we gladly explained that dental anxiety is something we see often and are accustomed to managing.  We assured her she’s definitely not alone and that they make drugs for that—no really, a little RX preopertively combined with some nitrous oxide (“happy gas”) sedation during the actual procedure can do wonders for a patient with dental fear and quite honestly, it saves us from needing a nerve pill too.

Overly anxious patients can definitely throw some bad vibes out there that can get even a seasoned dental team off their game.  Nobody wants that.  Everyone involved should be calm and relaxed.  We deal with nervous patients on the daily.  Nervous patients can be talked through it.  Patients with severe dental anxiety are a different story.  Those patients can be dangerous to themselves and the operator if not managed correctly.  Oftentimes, correctly means a little sedation.

When I say sedation you’re immediately picturing those hilarious YouTube videos of all the teenagers after their wisdom tooth extractions.  We can’t blame you.  We think they’re pretty funny too.  That’s a deeper sedation than what we’re talking about here and quite frankly, about 75% of those are exaggerated—still funny—but definitely exaggerated.   The sedation we’re talking about is some oral sedation sometimes with something as mild as Valium.  This has several benefits: 1. With mild oral sedation, there’s no IV involved. If you’re scared of the dental procedure, chances are an IV might freak you out.  2.  With this type of sedation, you still have control of the situation.  You can speak when spoken to and answer questions and take commands—you’re just super chill!  This is important because for a lot of the anxious patients we deal with, they state that not “having control” during a dental procedure is the root of their fear, so anticipating a deeper sedation where you lose more of that control due to a strong sedative will, like the IV for some, cause more anxiety.  3.  It’s quickly reversible.  4.  You won’t say anything so stupid as to land yourself on a hilarious YouTube video.

Back to the case; we started with smaller procedures like cleanings and fillings to build up her confidence and comfort level in herself and us.  Soon, she was doing great.  That doesn’t mean we took away the Valium and nitrous, that just means we learned what works for her and stick to it.  Dental appointments became more regular for her as she no longer dreaded them (or at least not nearly as bad as before).  Upon a routine visit we discovered a nonrestorable tooth which just means saving the tooth was not a viable option which left us with the following options: 1. Nothing (as nothing is always a choice although not advised of course), 2. Remove the tooth and do nothing to replace it (understanding that teeth on either side and above will shift which will negatively impact chewing, hygiene, bone health, and, with this being a large first molar, even face shape), 3. Remove the tooth and replace with a fixed bridge (not our first option as they’re sometimes nearly as much as an implant, cause the cutting down of two healthy teeth that may otherwise not need crowns, and the support of three teeth following now rides on the health and stability of two teeth—-we see a lot of eventual bridge failures), a removable partial denture (definitely the most economical choice but with good reason since it’s also the most uncomfortable option on the list making it the one that most patients are happy to remove permanently once they’re delivered—there’s a lot of these laying around collecting dust), or an implant (the Range Rover of all these options as this is the option that’s most like your natural tooth in looks, function and feel).

Our patient chose to extract the tooth, and reluctantly so but this time not because of dental fear (she knew she’d be okay with our little tricks), but because this is the first tooth she had to be faced with extracting.  It’s like losing a friend or family member when you actually value your dental health and make that connection between dental and overall health.  She explained that she first wanted to get through the extraction before deciding to pull the trigger on the implant, but she let us know this was the route she was leaning toward.

She did great with the extraction thanks to our massaging chair, cozy blanket, dimmed lights, awesome musical selections, and soft voices.  The Valium and nitrous probably didn’t hurt either.  I was extra careful to make sure the extraction was as atraumatic as possible, not just because I wanted to avoid making a fearful patient even more anxious, but because it’s important to maintain the site as much as possible when planning a future implant as this can save bone which can save time and money for your patient later.

Healing went as expected and the patient contacted us to let us know she was ready to proceed with the implant.  We had her back in for a 3D image and optical scans of the site to facilitate surgical planning and a guided surgery for gametime.  With our imaging capabilities, I don’t just plan the implant surgery start to finish, I also plan the crown that will restore that implant start to finish.  In fact, I plan the ideal crown first because what’s the use of an implant if the crown is no good?  By planning the surgery crown down, I can plan the surgical placement in the ideal spot in relation to the final visualized result (the ideal crown).

Once the case was planned, a custom surgical guide was ordered for surgery day.  Think of guided surgery as investing in a blueprint before building your dream home.  If you’re investing in a house, do you want to explain your vision to a contractor then let him guess about everything from dimensions to cost or do you want a skilled contractor using an approved blueprint who has studied the layout and deminsions and used those to get your house and estimate as close to perfect as is achievable?  I pick the blueprints every time!  I don’t like surprises—-well, I mean some are okay, like a diamond ring, or birthday party, or Otis (he was a surprise), but surprises in surgery, my health or my budget—no thanks!

Guided surgery means quicker, safer, easier surgeries with better results and more idealized implant placement.  When you can minimize the length of any surgical procedure, you get quicker healing with less postoperative discomfort.  In some cases, like this one, no incision is even needed with a guided implant placement.  My patient walked away from a one hour appointment, where less than 30 minutes of that was surgical time, with no incision, no sutures and minimal bleeding.

We saw the patient today for a quick postoperative check.  No bruising.  No swelling.  No pain.  No inflammation even.  Other than the healing cap, you can’t tell she had an oral surgery just four days ago.  She reported that she’s needed none of her pain pills and has only had to take ibuprofen once and that was before bed (always when pain is at its worst) and after pressure washing on her second day postpperatively (typically when the worst of the pain and swelling occurs after a procedure).  Of course, I’m convinced now she’s a rockstar after the dental transformation she’s made with us and females are WAY better with postoperative discomfort and directions (sorry guys) so that doesn’t hurt things either.

There was an error retrieving images from Instagram. An attempt will be remade in a few minutes.